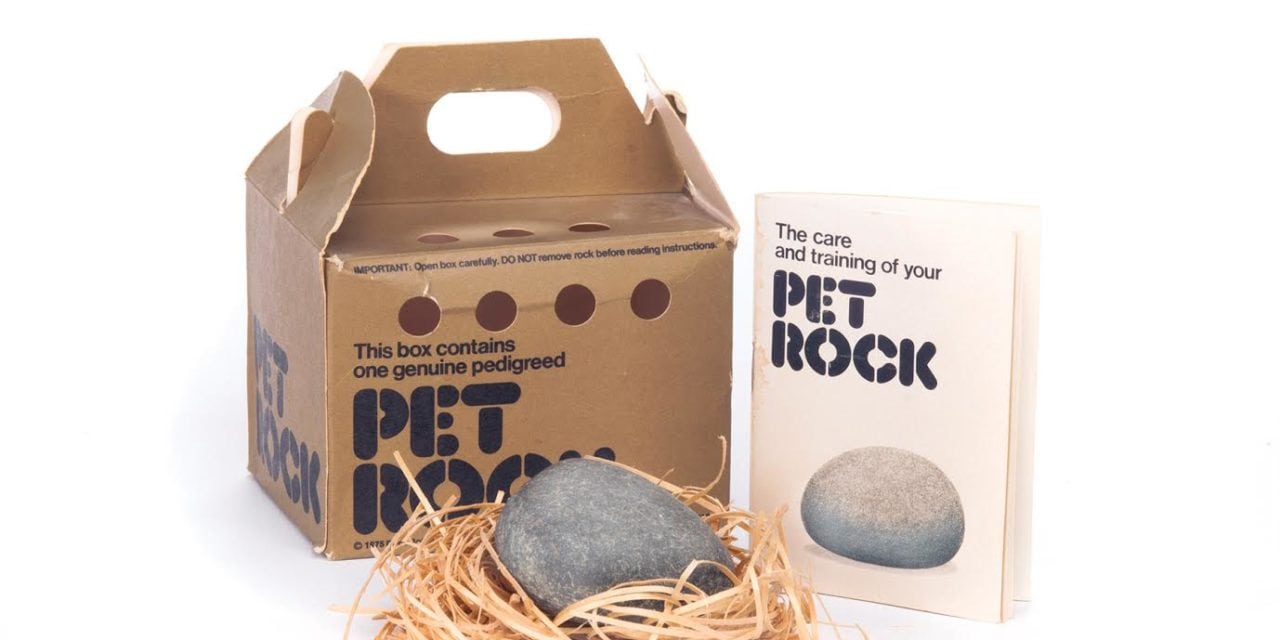 Before there were Koosh balls, before there were Cabbage Patch Kids, there were Pet Rocks. Perhaps the most endearing (if not enduring) fad of the Super70s, this gem of an idea was the brainchild of an advertising executive from California named Gary Dahl. Not content with traditional pets, which he considered too messy, costly, and misbehaved, he had taken on a clean, cheap and well-behaved rock as his pet. When told of his choice of pets, his friends first thought was that he was stoned. However, they soon agreed it was a good idea and Dahl spent a few weeks preparing a Pet Rock Training Manual. Topics included: “How to make your Pet Rock roll-over and play dead” and “How to house-train your Pet Rock.” Little did he know that fame and fortune was just a stone’s-throw away.

Dahl packaged the rock with his manual in a cardboard box designed to look like a pet carrying case and began selling them at $3.95 each. He introduced them at a gift show in San Francisco in August of ’75 and, as an ad executive, was savvy enough to create a press release which he sent out, complete with his picture, to virtually every major media outlet. In October Newsweek carried an article on the fad and dozens of local newspapers picked up the story. Soon even staid Neiman Marcus was carrying them. Dahl’s personal 15 minutes of fame culminated with an appearance on Johnny Carson’s The Tonight Show!

Dozens of copycat rocks flooded the market (if you find one that claims to be the “Original Pet Rock,” it is actually one of the copies; the one in our picture is an original) and after Christmas 1975, the fad was over. Over a million of these geological companions were sold before Americans came to their collective senses and turned their attention from Pet Rocks to Pop Rocks. 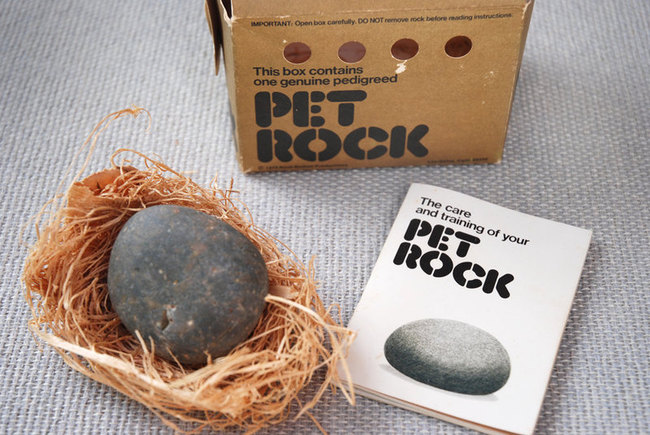 Three tons of stone from Rosarita Beach in Baja, Mexico was used to create Dahl’s pets. Not surprisingly, most of these rocks soon found their way to an unceremonious burial in their master’s backyard. So keep an eye out for a Super70s pet next time you mow your lawn! One wonders what geologists 10,000 years from now will make of the layer of Rosarita stone they’ll find all over North American continent!

The Next Big Thing

Every since Dahl left the rest of us thinking “Why didn’t I think of that?”, virtually all self-styled marketing geniuses have been trying to come up with the next “Pet Rock.” That is, an incredibly useless and inexpensive to produce product that captures the American imagination and sells unreasonably well. Though a few fads come to mind, no one since has been as successful with a product as useless as the Pet Rock.

Where Are They Now?

Gary Dahl, the former advertising executive and inventor of the Pet Rock is once again an ad man. He runs an ad agency near Silicon Valley, California. His creative talents are not limited to marketing, however. Proving perhaps that lightning can indeed strike twice, Dahl recently won the 18th annual Bulwer-Lytton Fiction Contest. But before you go sending telegrams of congratulations to Mr. Dahl, you should be aware that the prize is awarded annually for the “best” opening sentence for the worst of all possible novels.

The prize, awarded annually since 1982 by the English Department at San Jose State University, is named for Victorian writer Edward Bulwer-Lytton whose 1830 novel “Paul Clifford” began, “It was a dark and stormy night.”

Published in AeroPlanes and Airports