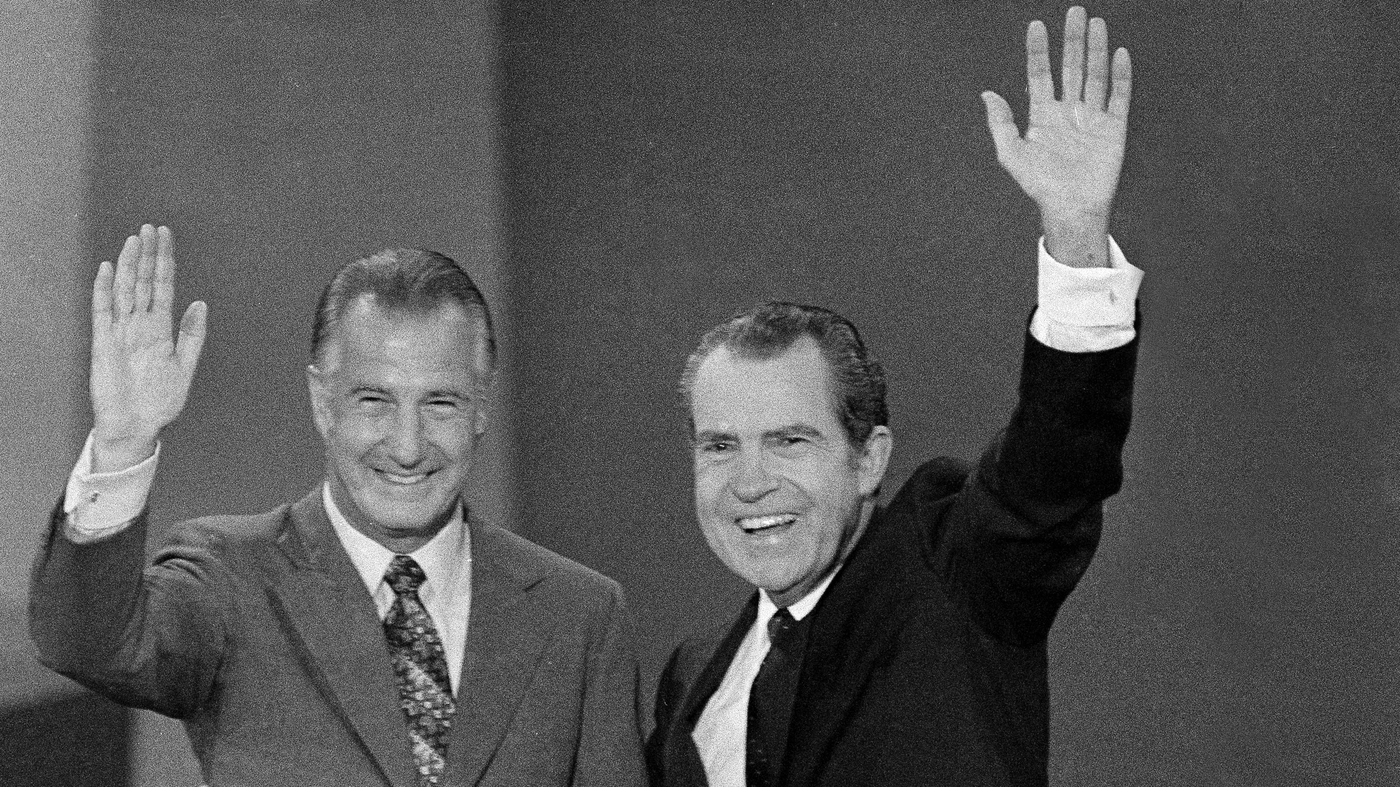 On October 10, 1973, following months of pressure and scandal, Vice President Spiro Agnew turned in his letter of resignation to President Nixon (who was soon to follow him) becoming only the second vice president to resign.* Michigan representative Gerald R. Ford took his place as vice president on December 6, 1973.

Agnew began his political life as a liberal Democrat and ended it as a law-and-order Republican who pleaded nolo contendere (no contest) to charges of tax fraud. He once called the media “nattering nabobs of negativism”** and found a political base with both social conservatives and what would later be called Reagan Democrats.

He rose quickly from a mere county executive of Baltimore County in 1962 to the Republican candidate for governor of Maryland in 1966. The Democrats nominated a race-baiting candidate and Agnew, running to the left of him, won becoming one of the first Republican governors south of the Mason-Dixon line since the Civil War. Just two years later, Nixon chose him to be his far-right, hippie-bashing, anti-intellectual attack dog – a role he (along with speechwriters William Safire and Pat Buchanan) clearly relished.

In fact, he was a hero to many and the subject of one of the first fads of the decade: T-shirts and other products sporting his image were mass-produced (check your local thrift store or our eBay links below and to the right). To his credit, Agnew refused royalties for merchandise with his likeness and instead asked that any proceeds go to aid families of American POWs. As you will see later, the “royalties” he chose to keep came from far deeper pockets.

During the ’72 campaign, the Democrats ran an ad which simply showed the words “Spiro Agnew, Vice President” with someone who is heard but not seen chuckling at first, but eventually breaking into all-out laughter. Like the infamous Goldwater/A-bomb commercial of ’64, this controversial ad was quickly withdrawn. It was Agnew who was laughing by the end of the campaign as he and Nixon easily beat George McGovern and his divided Democratic party.

I Will NOT Resign

A defiant Agnew spent most of 1973 deflecting attention away from the growing Watergate scandal with his own troubles. He was accused of receiving kickbacks – illegal payments – from contractors who wished to do business with the state of Maryland while he was governor. The charges soon expanded to include payments he received while vice president. He claimed the charges were “damned lies” and vowed never to resign.

Some cynics saw the selection of Agnew as a running mate as Nixon’s insurance against being assassinated. Considering all of the assassinations in the sixties, any kind of insurance would have been prudent. But even Nixon-haters were glad it never came to that. He was a lightning-rod for liberals and Agnew’s troubles – no matter how damaging to the Republican Party – certainly helped keep Nixon’s troubles off the front page. That is, until Agnew had to resign.

Fooled Them All – Except the Taxman

Agnew pleaded no contest to charges of tax fraud. Ironically enough, the charges stemmed not from having received kickbacks and bribes as he had been doing for the better part of a decade, but for not reporting them on his income tax returns! (You may recall that similar charges – and not murder – are what brought down mobster Al Capone.)

In typically brash Agnew style, he apparently had them deliver the illegal payments – which he called legitimate political contributions (in unmarked envelopes containing as much as $20,000 at a time) – directly to his vice presidential office! When you believe you are above the law, there is no reason to make such transactions any more complicated than they have to be.

While you or I would have spent five to ten in the pen, Nixon’s Justice Department took pity on him and let him off with a fine and three years probation. The puny $10,000 fine only covered the taxes and interest due on what was “unreported income” from 1967 even though there was evidence that the payments continued while he was vice president. That sweetheart plea bargain was later mocked as the “greatest deal since the Lord spared Isaac on the mountaintop” by former Maryland Attorney General Stephen Sachs.

When it became apparent that Agnew was getting off with little or no punishment, law students at George Washington University used a class project to bring suit against the former Governor. Law School Professor John Banzoff allows his students to pick their projects and they initially sought the help of Agnew’s successor in Maryland, Governor Marvin Mandel. Mandel, however, was not receptive and soon found himself in prison serving a three-year sentence for mail fraud and racketeering. The charges stemmed from a scheme where he received $300,000 as a quid pro quo to influence race track legislation.

The students, who were collectively known as Banzoff’s Bandits, soon discovered a precedent under old English law that allowed an individual to bring suit when the government refuses to. It was the break they needed. They found four residents of the state of Maryland willing to put their names on the case and sought to have Agnew repay the state $268,482 – the amount he was known to have taken in bribes.

Somewhat surprisingly, the students won and after two appeals by Agnew, he finally resigned himself to the matter and a check for $268,482 was turned over the the Maryland state Treasurer William James in early 1983.

Whether you saw him as a spokesman for Nixon’s “Silent Majority” or as an ultra-conservative precursor to Dan Quayle, he proved to be far more on target on the golf course than in the political arena. He once used his ‘nattering’ nine-iron to take out two innocent bystanders at a golf tournament with consecutive shots before storming off the course.

If Agnew had not been caught, he would have become President Spiro T. Agnew on August 9, 1974 and Gerald R. Ford would be remembered today by about three people as the former Republican Minority Leader of the House from Michigan and one-time Warren Commission member.

Where Are They Now?

After resigning his post and paying his fines, Agnew wrote two forgettable novels (one about a disgraced Vice President!) and a paranoid and unapologetic memoir entitled Go Quietly or Else, where he claimed Nixon’s henchmen were out to get him and that the president “naively believed that by throwing me to the wolves, he had appeased his enemies.” He also worked as a lobbyist (the party takes care of its own – even if they resign in disgrace) before disappearing into complete obscurity. Agnew did attend Nixon’s funeral in 1994. Spiro Theodore Agnew died of leukemia on September 17, 1996 at the age of 77. His understated gravestone reads: “Agnew, Spiro T. 1918-1996.”

Professor Banzoff, incidentally, has been in the news lately as a crusader against the ever-expanding beltlines in America. He wants to reform the fast food industry – just as he did to the tobacco industry (earning the nickname “the Ralph Nadar of the tobacco industry”).

John C. Calhoun resigned in 1832.
**He had reason to hate one journalist in particular: Jack Anderson as much as outed his son James “Randy” Agnew in a column that Anderson apologized for 30 years later in his book, Peace, War, and Politics: An Eyewitness Account.

Published in AeroPlanes and Aviation